Once upon a time, herds of bison were present in many parts of Europe. Bison were roaming from the northern parts of the Iberian peninsula up to the southern parts of Scandinavia, and from what is now the Netherlands to the Caucasus and further east into Asia. Bison fossils dating from the early Holocene (circa 10,000 years ago) have been found in Sweden, Denmark, Germany, Belgium and the Dutch side of the North Sea.

From the Middle Ages, intensive hunting and habitat loss drove the European bison to near-extinction. The last herds survived in Eastern Europe, where the last animals were killed in 1919 in the Bialowieza forest (Poland) and in 1927 in the Caucasus. Some 50 animals were kept in captivity. Since then, considerable effort has gone into breeding and reintroducing bison into European nature areas. At present the global population consists of some 7,000 animals, of which about 5,000 live in the wild or semi-wild. Until today, the European bison is listed on IUCN’s Red List of Threatened Species. 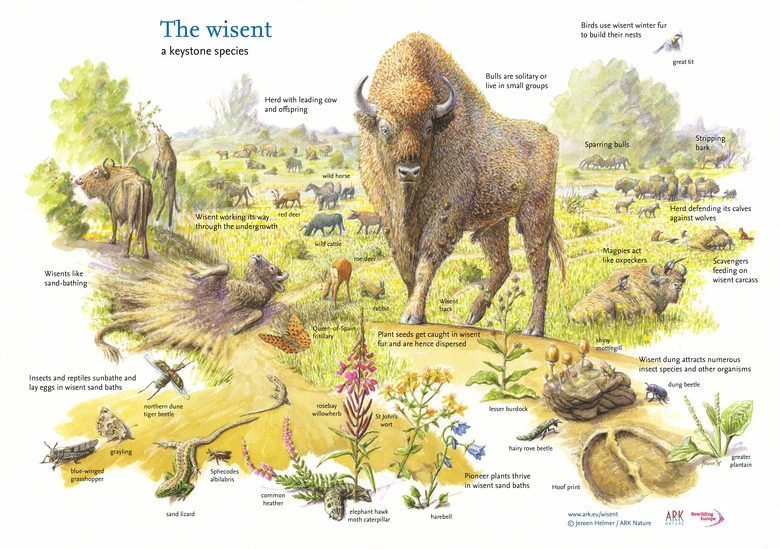 The Wisent a keystone species

The European bison (also known as wisent) is Europe’s largest surviving land animal. It is considered a keystone species, since it plays a distinct ecological role in shaping the landscape it inhabits. In addition to consuming great quantities of grasses and feeding on shrubs, bison influence the vegetation by de-barking trees, breaking open dense undergrowth (simply, by walking right through it), and creating bare soil patches (by wallowing), which allows pioneer plants to move in. In addition, bison disperse nutrients (dung) and seeds across their territory. Breeding birds use bison winter fur as nesting material, and magpies follow the bison herd to pick off ticks and other parasites.

In 2007, ARK Nature and partner organisations together initiated the reintroduction of bison to the Netherlands. In a pilot project, bison were introduced into the Kraansvlak coastal dune reserve, managed by project partner PWN. This project has been a great success: the bison herd is thriving and – thanks to the bison and other grazers – the landscape has regained the dynamic and varied dune formations it used to be known for. In addition, valuable experiences regarding bison ecology and human-bison interactions have been gained. Equipped with this experience, ARK Nature introduced bison to three other nature areas in the Netherlands: Maashorst and Veluwe (2016) and Slikken van de Heen (2020). Here, like in the Kraansvlak reserve, bison and other large grazers are given space to roam freely and shape these natural landscapes once again.

For further information about European bison and the bison project Kraansvlak in English, check out www.wisenten.nl/en.