Back in 2005, ARK Nature started a small natural grazing project near Madzharovo in the heart of the Eastern Rhodopes, Bulgaria. This project would become the first step in a much larger rewilding programme that has made a lasting contribution to the region’s biodiversity and economy. Today the area is part of Rewilding Europe.

The Rhodopes are a mountain range in the southeast of Bulgaria, near the Greek border. The area has exceptional biodiversity, including hundreds of rare species of birds, reptiles, amphibians, plants, and mammals such as wolves, jackals and sousliks (ground squirrels). This natural wealth is sustained by a mosaic landscape of open shrubland, flower-rich grassland and forest.

In the distant past, this mosaic landscape was created by wild grazers such as Tarpan horses and European bison. After their disappearance, the area was grazed by domesticated animals, which continued to keep the landscape open and varied. However, pastoral culture gradually disappeared in the 20th century, when many herdsmen left the area in search of better economic perspectives. Trees started to take over the landscape, canopies were closing, and habitat diversity began to decline.

To save the mosaic landscape ARK started a pilot project, funded by the Dutch embassy, with a small herd of Rhodopi shorthorns in 2005. Based on the positive results of this pilot, ARK was awarded a large grant from the Dutch National Postcode Lottery for a follow-up project (‘New Thracian Gold’, 2009-2014) together with Avalon, an organisation for sustainable agriculture.

The aim of New Thracian Gold was to set up an alternative economy for the Eastern Rhodopes, based on natural grazing, organic farming and ecotourism. From the start it was clear that the project’s success would depend on the input and commitment of the local population. Therefore, the project worked with local focus groups who gathered several times a year at different locations throughout the region.

In 2011, the initial herd of Rhodope shorthorns was joined by a herd of Konik horses (brought in from the Netherlands) and Karakachan horses (a local breed). In 2012 more Koniks were introduced, in addition to 15 red deer, a species that used to be common in this area. Furthermore, some fallow deer from the Studen Kladenec reserve were moved to other parts of the Eastern Rhodopes. In 2013 five European bison were introduced into the area. When the project ended in 2014 the work was taken over by the Rewilding Rhodopes Foundation, which is now a partner of Rewilding Europe.

Until recently the Rhodopes were not well-known (even within Bulgaria), except by avid bird-watchers. The New Thracian Gold project has put much effort into promoting sustainable tourism in the region. Key to success was the combination of nature development, involvement of local people and media attention. To promote ecotourism, ARK and local partners developed hiking trails, maps and tourists guides. Farms near the nature reserves switched to organic farming and opened their doors as B&Bs. Today the area is visited by tourists from inside and outside Bulgaria, supporting the local economy. 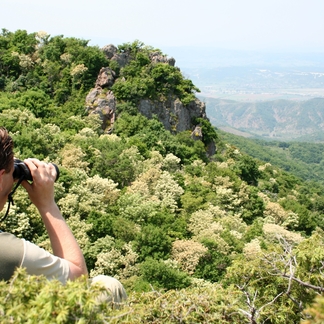